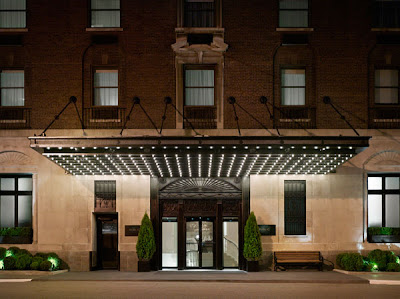 Renny and I were treated to a delish lunch this afternoon at The Pump Room.  While it proved to be quite the mid-day scene, I had just come from a long overdue cut & color and felt as if I partially passed muster.
The Pump Room is housed in the incredibly chic Public Chicago, formerly the Ambassador East.  The menu was created by renowned chef, Jean-Gorges Vongerichten and features fancified favorites that are absolutely approachable.  A few of the original Pump Room’s menu items are still on the menu, simply re-imagined by Genius Jean-Georges, along with many newly created items as well as some existing dishes taken from Jean-Gorges’ other successful restaurant, abc kitchen.  They are working on a rooftop garden to further support their farm-to-table concept. 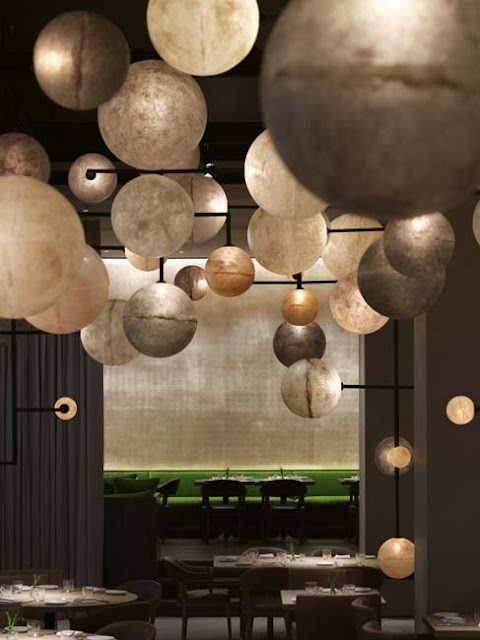 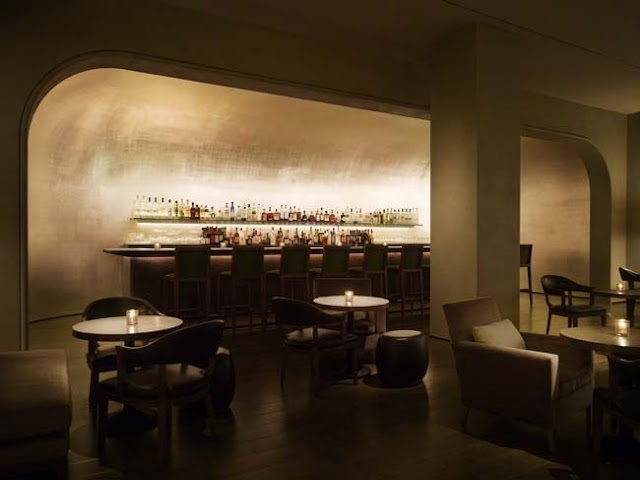 The bar at the Pump Room casts a golden glow on it’s already glossy guest.
The former Pump Room was frequented by the likes of Sinatra & Bogart during the Golden Age and while the vibe is decidedly current and fresh (not a lick like the old space), I hope our dear city (with the help of chic spots like this) can attract our own modern day Grant’s and Hepburn’s.
The Ambassador East has been reborn as Public Chicago, conceived and designed by Ian Schrager (known for other hotel hotshots like the Delano, the Sanderson and the Paramount, to name(drop) a few). The bones of the hotel remain (along with the stunning molding!) with the rest having experienced more than a major facelift.
There is such a feeling of serene chicness – crisp bold white paired with worn mirrors and warm woods.  It’s perfect. 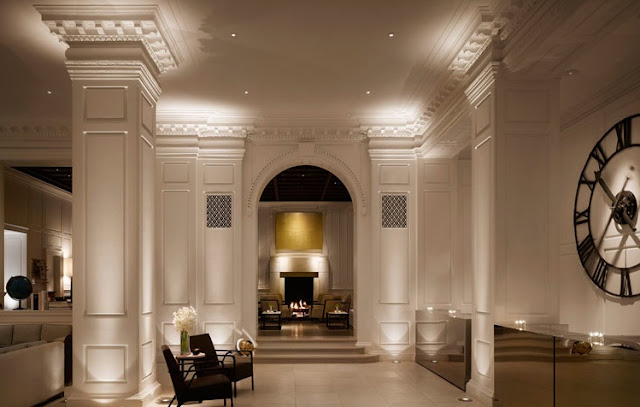 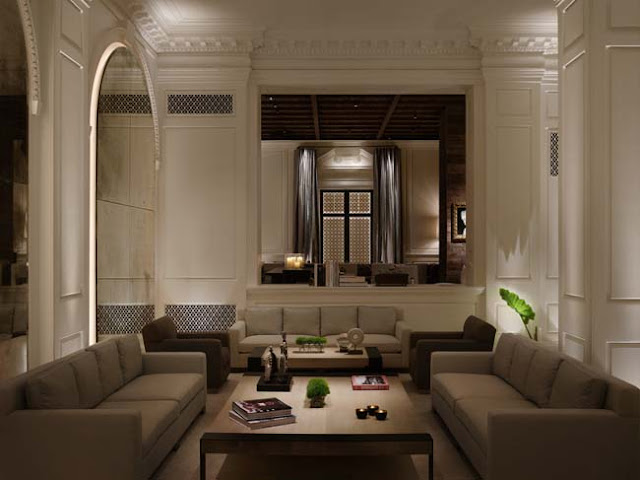 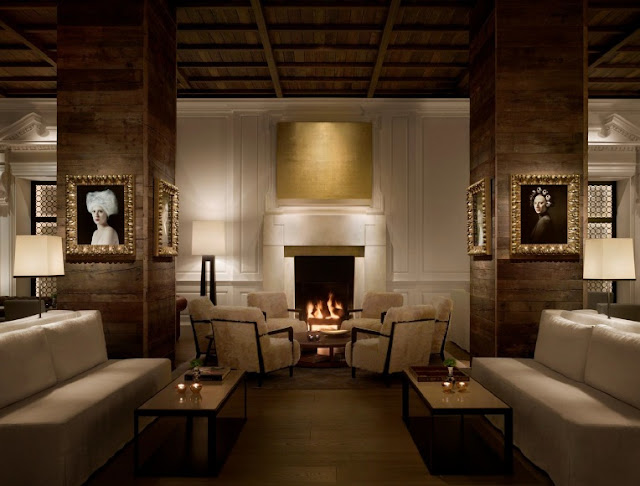 My favorite room may be the Library, set with cozy couches, faux fur lounge chairs, a flickering fire and rustic wood touches. 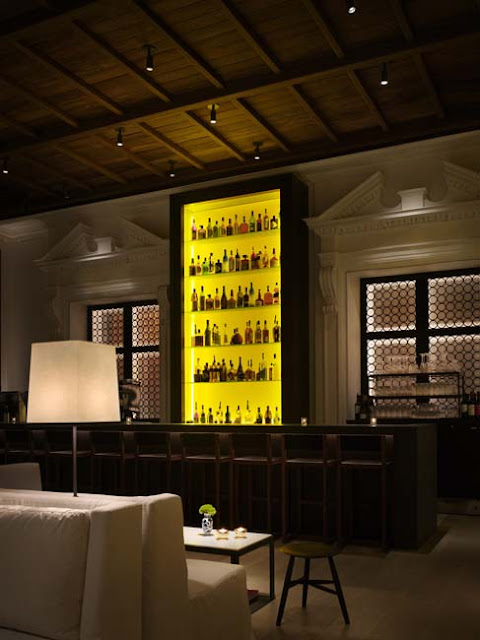 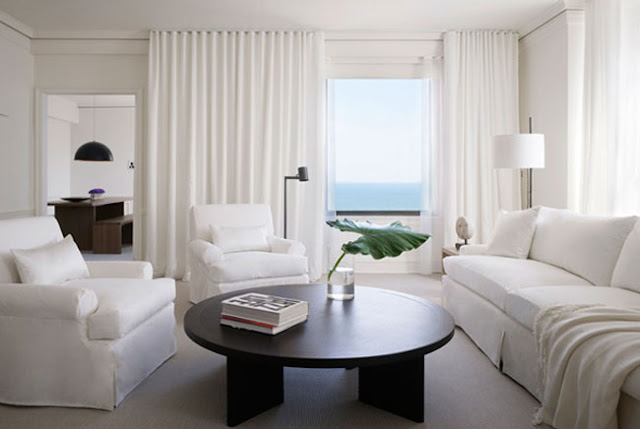 The rooms are incredibly simple, white on white on white.
“What do you do when a couch gets dirty?”  “We were told to throw it away.”  Crazy talk.
(PPS:  The one bedroom suites are simply perfect for bridal parties.)
While I’m disappointed there isn’t any event space that can hold more than about 50 people at once, the hotel itself has me seriously smitten.
(image credits) photos from public chicago collateral 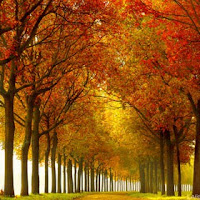 Chicago has been given the gift of gorgeousness, that will sadly be forgotten, overshadowed by nearing blustery, soggy days.  It’s only fair.
Until then, I absolutely can’t describe the perfectly dreamy weather we’ve had recently.
Yesterday, I allowed myself the indulgence of a sunbathe.  The air was warm, the sun was strong, the skies – blindingly blue. 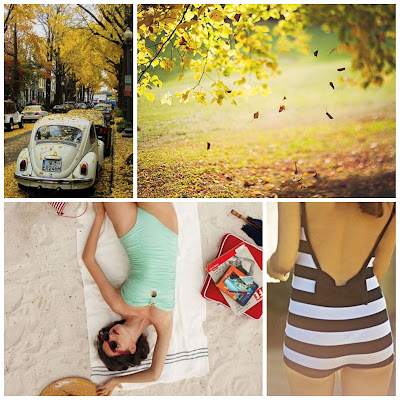 I have a new favorite pastime:
Sunbathing in a graceful shower of falling leaves.
{image credits:  tunnel of trees, bug and aqua sun worshiper from pinterest.  falling leaves from tumblr. striped toosh {perfection} from grosgrainfabulous.blogspot.com}
Relaxation has been penned into my diary for the weekend.  A must.  Perhaps I’ll take a trip to the beach – where I hope to look as serene as these gorgeous girls. 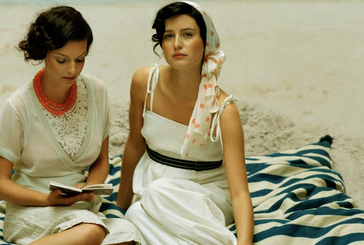 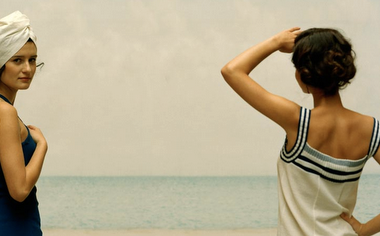 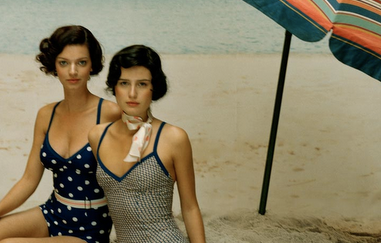 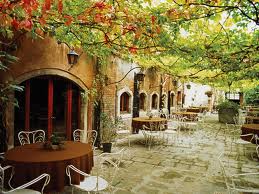 The blinding early morning sunshine that started the day today seems, at once, to have welcomed the melodic chorus of cheery birds, a fresh leafy green fragrance in the air, and the subtle buzz of landscapers tending to green lawns {ok, or teensy patches here in the  city}…An indication that we Chicagoans are finally able to bust down our emotional barriers that have protected us from repeat disappointment, and get our hopes up for consistently warmer temps and the opportunity to emerge, for good, from our mind-numbingly-long winter hibernation.
Paired with a prelude of a true spring, comes the anticipation of many future evenings that will be perfect for dining al fresco – my absolute FAVORITE summer pastime.  Here are a few images that continue to inspire optimism: 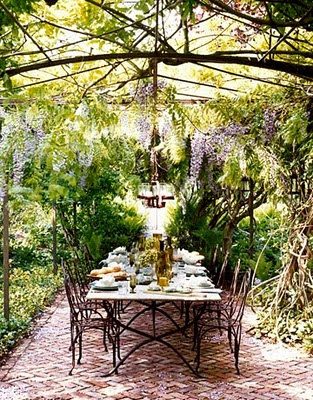 A table set with wisteria dangling from above is sure to make any meal taste divine. 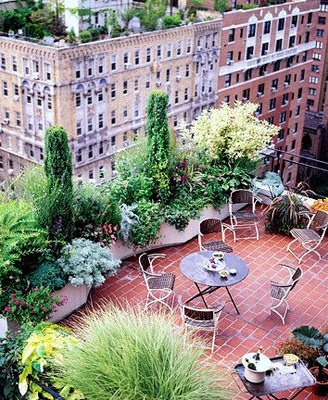 While most of us don’t have a country lair – a rooftop terrace and container garden would be just fine? 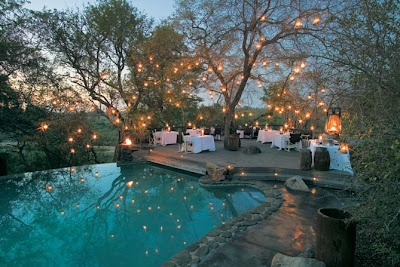 Ah yes, tables set poolside with copious candles twinkling overhead…I’ll have to remember that one. 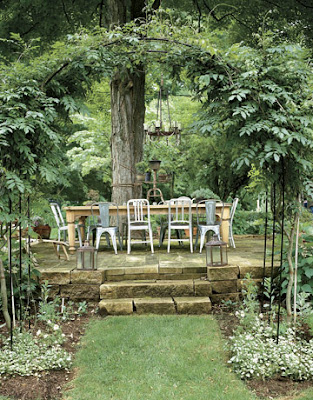 I love the perfectly coiffed pathway leading to the dinner table set under the shade of a massive tree.
And although we may not have settings quite as dreamy as those – here are a few of my personal favorite outdoor dining spots:
Picccolo Sogno – For an oasis-like patio and a seal of authenticity from the Italian government {oh, and don’t pass up the delish gnocchi con fungi}
Chez Joel – For a shared meal of co au vin and a hearty bordeaux
Pelago Ristorante – For their indulgent truffle risotto and a setting like a true Italian piazza
Erie Cafe – For a glass of wine and a cigar…really
The Terrace at Trump – For the most insane view of our gorgeous city and overpriced champagne cocktail
Boka – For a michelin star rated meal
Jam – For a hellofa wait on a weekend, but a hearty eggwhite omelet, artfully presented
I simply can’t wait.
{image credits}  alleyway – unknown.  wisteria – house beautiful.  cityscape – martha stewart.  pool setting – unknown.  grassy setting – country living
Although I shall never utter a word of criticism for the absolute dreamy warm and sunny Chicago weather we’ve had so far this October, the air has seemed to shift just a bit more seasonally brisk the last couple of days.  I’m officially ready to embrace autumn {a season I truly adore}!
The air smells of freshly fallen leaves, pumpkins and gourds are readily available at nearly all markets and fall-inspired treats are showing up at favorite eateries.  Here are just a few images I’ve taken capturing my whole-hearted acceptance of the season: 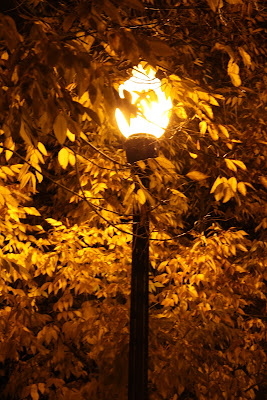 This charming streetlamp is just out our back door and I found myself popping back inside, after walking Illie one evening, to grab my camera in order to capture the amber glow of the colored leaves. 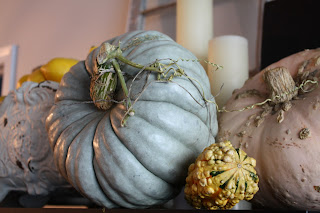 I absolutely love the unexpected beauty of odd pumpkins and gourds.  I picked up these lookers from my local Trader Joe’s! 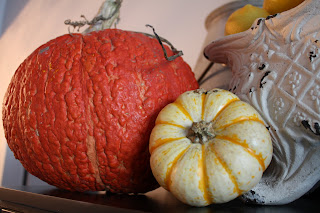 Don’t listen to them…personality does count for something! 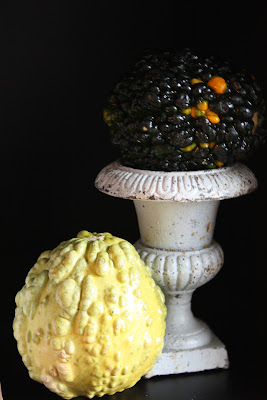 These little guys are framed perfectly in the shadowy nook of our bookshelf. 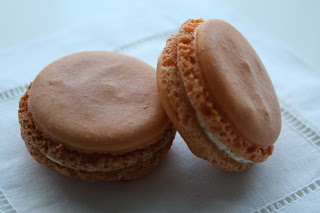 And my latest seasonal craving:  a latte and a pair of pumpkin macarons from the charming bakery, Sarah’s Pastries and Candies on picturesquely perfect Oak Street.
Autumn, the year’s last and loveliest smile.  -William Cullen Bryant

Amidst the hustle and bustle of last week, Renny insisted we make time for ourselves…A lunch date was penned in our diaries and we weren’t going to bail – we promised!  It turned out to be a bit of a celebration, a Beyond Blissful year together! and Renny asked where we should dine.  I had recently heard and read nice things about the new French-American restaurant by the owners and chef of The Gage, called Henri.
We arrived for our late lunch to a packed house – busy with businessmen, locals, foodies, symphony-goers and tourists alike – all taking time out of their schedules for a sophisticated mid-day meal. 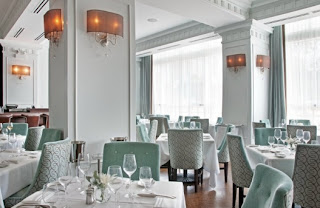 The bright restaurant initially reminded me of a European salon, a beautiful dusty robins egg blue {or nile blue to us industry folk!} and chocolate brown color pairing dressed the walls and the furniture.  The staff was beyond welcoming and friendly…something that most new, hot restaurants seem to care less about.  After a brief moment to freshen up {the luxe restrooms were modestly and handsomely marvelous} we were seated immediately, thanks to our reservation. 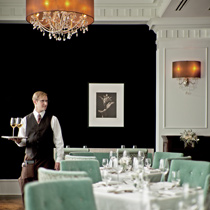 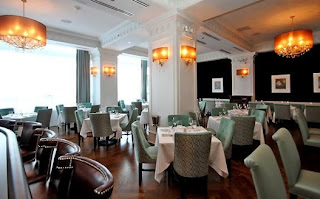 After Renny’s insistence of beginning with a coupe of champagne (the glasses were substantially gorgeous – and you know I’m a sucker for a saucer of bubbly!), the polished bus boy offered up a gorgeous mahogany tray of freshly baked french bread.  Our meals were as dreamily delicious as the day’s warm weather and the decor.  I ordered the mussels – I truly argue – the best I’ve had.  They were submerged in the lightest, most delicious fennel broth, paired with a crusty piece of bread, perfect for trying to sop up every last drop of the salty goodness.  Renny ordered the snapper and was as equally impressed as I was.  After summoning all of our willpower, we passed on the dessert and instead ordered cappuccinos. 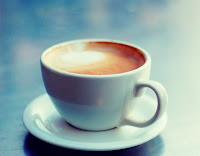 I so enjoyed being a lady-who-lunched and so appreciated the company and generosity of my dining companion.  The meal was delish, and I’m already dying to head back…
Oh, Henri…I think I’m fallin’!
{image credits}  restaurant photos taken by steven johnson photography, cappuccino found on flickr by digital gopher 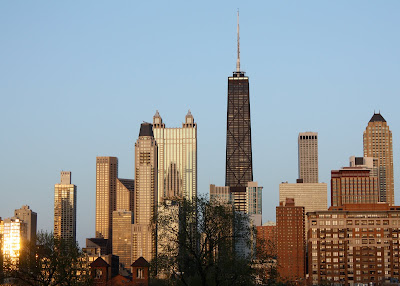 Alright – I’m a liar.  I’m obessed with my city.  Obsessed with beautiful late afternoon spring days and after a lovely day with some favorite clients and ahmazing vendors, I can’t help but be obsessed with my career.

Enjoy the weekend – Renny and I will be preparing for a very special wedding Sunday.  Incredibly emotional and romantic.  Can’t wait to share!